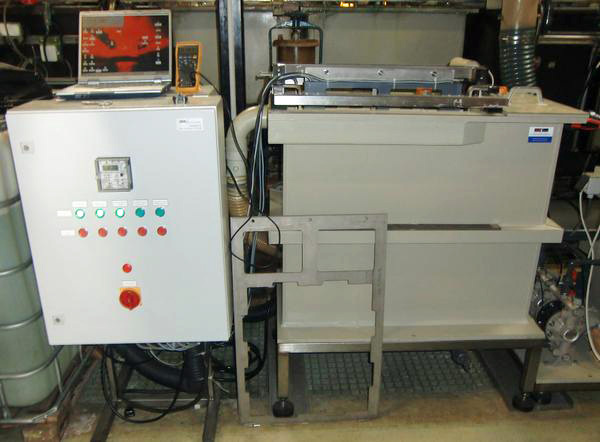 Elsyca Intellitool is a software controlled electroplating tooling concept developed by Elsyca. It reduces the pattern dependence of the deposited layer of copper on the boards. The main change from a standard plating cell is the introduction of a controllable grid ( matrix) of anode segments, at a small distance of the board to be plated.

A first industrial machine implementing the Elsyca IntelliTool approach has been installed at Eurocircuits in Baesweiler (Germany). The aim is to improve the uniformity and or deposition speed of copper electrodeposition on printed circuit boards.

A dedicated software module has been developed to optimize the imposed current on each anode segment to yield maximum uniformity. The optimization algorithm takes the design of the machine, the position and dimensions of the anode segments, the chemistry and polarization of the electrolyte and the pattern on the panel into account. Based on a finite element model the current on all anode segments is determined and used to predict the plating thickness distribution over the printed circuit board.

Simulations are performed for determining the improved performance of the Elsyca IntelliTool approach compared to the traditional plating process. Below is a comparison of the plating thickness distribution over an industrial printed circuit board (front and back side), respectively plated in a traditional vertical plating configuration and with the new Elsyca IntelliTool approach.

The same current on each side of the panel and the same plating time is used for both approaches.

The only difference is the configuration: a main anode system in the traditional plating cell as opposed to a segmented controlled anode system in the Elsyca IntelliTool case. The green areas indicate plating within specs of 20 to 35 micron. The blue areas indicate plating thickness below 20 micron, the read areas show plating thickness above 35 micron.

The results on the actual panels demonstrated: