For work piece anodising, Elsyca performed simulations to study the effect of both on the resulting oxide layer. 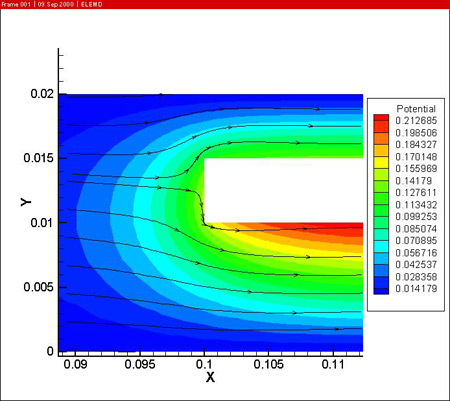 It is generally known that the combined effect of the current density distribution and temperature control (heat removal through forced convection) will determine the oxide layer thickness and properties. For work piece anodising, Elsyca performed simulations to study the effect of both on the resulting oxide layer.

The geometry of the anodising cell under consideration in this example is given in the figure below. The work piece is positioned a-symmetrical in the flow channel.

In a first step, the fluid flow corresponding with a Reynolds number of 400 is computed. A potential difference of 18 V is imposed between the anode and cathodes to drive the anodizing reaction. The resulting potential, temperature (in the electrolyte and the work piece) and current density distributions are shown below.

From the simulations it is clear that the potential distribution is not influenced by the fluid flow. The temperature distribution however shows a clear temperature gradient in the work piece in the longitudinal direction (7 °C over 0.05 m). Due to the high thermal conductivity of aluminum and the reduced height of the work piece, there is no significant temperature difference between upper and lower side of the part.

The figures also show the developing temperature boundary layer along the work piece. Remark also the presence of two recirculation zones behind the work piece, leading to reduced cooling at the downstream side of the work piece.

In the second calculation the velocity of the fluid flow was decreased to reach Re = 80. The potential difference was kept at 18V. The temperature and current density distributions for this case are given below.

From these simulations it can be observed that, when the same potential has been applied, the global temperature at the work piece is much higher now, due to the reduce cooling of the lower flow. In addition to that, the current density is reduced so the efficiency of the anodising process is much lower. This illustrates the interaction between heat removal and obtained oxide layer for a given applied voltage. There is clearly an optimal energetic working condition.