The Elsyca Intellitool concept can be applied to the platinum plating process of blade programs. 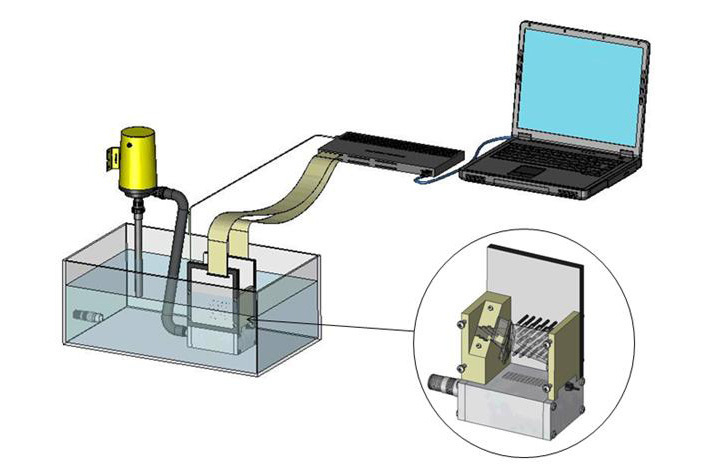 The Elsyca Intellitool concept can be applied to the platinum plating process of blade programs. Wet run tests for different blade programs have demonstrated that Intellitool based tooling units are extremely well performing, allowing for very important Pt metal savings (up to 50 % compared to state-of-art industrial practice), at a plating speed that was 2 to 5 times higher, hence leading to a huge productivity increment. In addition these Intellitool based tooling units can not only be optimised towards uniform layer thickness specifications over the shroud surfaces of a blade, but also towards differential speciifications (e.g. leading – trailing edge, concave – convex side of the blade). Due to its sparse structure, the pen matrix is ideally suited for precisely controlling the current density over the blade surfaces while allowing for a strong electrolyte refreshment along these surfaces, thereby preventing that poor quality deposits will be produced.

The Intellitool concept consists of a hardware and a software part. The core hardware consists of a double anode pen matrix structure that is dedicated to the shape of the blade, whereby the current on each pen can be individually controlled in time. This pen matrix structure is integrated in a plastic assembly that contains the blade holder and possibly also a pressure chambre for a dedicated forced flow system. A steering unit contains individual current sources for each anode pen and is connected to the pen matrix holders by a multiple flex copper connect. This steering unit is controlled from a computer by means of graphical user interface. This interface also allows the operator changing process parameters like total process time and individual pen current values. The steering unit is further equiped with a read back option that allows identifying malfunctioning or worn out anode pens. This information is displayed in the graphical user interface.

The Intellitool concept is basically modular, allowing for combining multiple single blade units into a bigger tooling set that is controlled by one single steering unit and user interface.